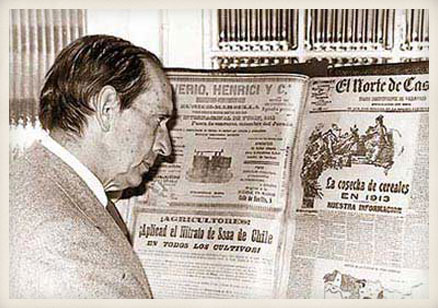 I was born into journalims fourty years ago and throughout El Norte de Castilla and my occasional colaborations with other newspapers and magazines I kept my bond with this profession along four decades. During this time I learnt two essential for my later dedication as a novelist: consideration for the daily life events-those the press expose-and the summarizing requirements that nowadays journalism needs to expose facts with the largest details that involve those facts but expressed with the smallest number of words. With this previous experience in journalism I rolled into narrative and even the years have passed by, I keep on sticking to those rules, in other words, my novelist condition leans on my journalist condition. Journalism has been my narration school.

Numerous articles […] and half a docen of travelling books are the clearest example of his condition as a journalist and reporter. […] There is also in some of his novels a clear literary use of his journalist resources. Just a few examples to be rememberd are those pieces of news that are shown at the beginning of some chapters of Mi idolatrado hijo Sisí or the texts with which Mr Eloy teaches how to read Desi in La hoja roja, that are also newspaper headings. The obituary with which Cinco horas con Mario starts, is in itself a journalist text and in Diario de un emigrante, that has as an inspiration a trip that Delibes made to Chile and that collects a numerous amount of resources that the writer previously used when he published his travelling chronicles in the newspaper El Norte de Castilla and later he gathered in his first travelling book. Cartas de amor de un sexagenario voluptuoso is somehow a chronicle of the difficult situation that the Spanish press was going through during Franco´s regime. Apart from the creation sphere, the Spanish press situation during those years is the main essay topic in “the censsoship of the press during the 40´s”.

Miguel Delibes was not like many others just a writer who published articles on the newspapers, he was truly a professional journalist. He started very young in this business, just in his twenties; In the beginning of 1941 as an occasional draftsman for El Norte de Castilla  and then as an editor. Later on he became the assistant manager of the newspapaer, the oldest newspaper of Spain and finally he became the manager. This means that Delibes doesn´t limit himself to the mere journalistic production for the press, even if it was plentiful and varied. He goes beyond all this, he covers all the structural framework of the functioning of the newspaper, even making difficult decitions, especially when he was the word of command of the newspaper, that had significant consequences in the editorial and the business path of the newspaper.

[…] the novelist belongs to his geography and his time, to his circumstances. In the case of Miguel Delibes, journalism was more than a circumstance or a life style. It is true that he was never exclusively dedicated to the journalism. First he combined journalism with his preparation for the official exams to obtain a position as a professor in business law at the Business School of Valladolid. Afterwards whe he obtained the mentioned position in 1945 he balanced journalism with his job as a professor. And finally from the year 1947 onwards, especially when he received the Nadal award, he combined journalism with his dedication to literature. These three facets- teaching, journalism and literature-coexisted together in some other people, but never with the implication and the excellence that Delibes achived in each of those facets.

Delibes was determined to form a team of collaborators to whom he only required a good cultural formation and the willingness to intervene in society. He didn´t care about political positions or possible compromises. Delibes and that group of collaborators- Lozano, Umbral, Leguineche, Pastor, Pérez Pellón, Arrizabalaga, Gavilán- and some editors like Félix Antonio González and Campoy, were a lucky team in those constricted years. He placed himself in the position of the narrator and placed us in the palce of the intellectuals. The most important thing is that he encouraged us to speak our minds. He was just the opposite to the censorship regime.

To me Delibes has been a very significant figure. Not only because he guided me to journalism, but also because he taught me the hard lesson of putting to the test and how to recognize the other´s reasoning. A radical liberalism that has nothing to do with the dogma of economis and political liberalism. I learnt from him, that we need to be intelligent pessimists and willing optimists. Delibes has been for me an ethic reference. It is my duty to claim now that when I was arrested and processed in 1962, Delibes doveted himself totally to my defence. He felt that swipe on his own skin. 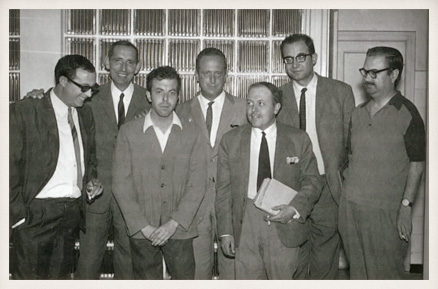 Miguel Delibes represented himself an entire Faculty of Journalism. The only one that I got to know and the only one I respect. 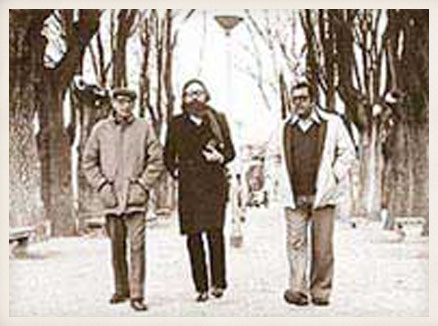 Delibes persuaded me, Paco Umbral and many others from applying literature to journalism. From his manager desk at the El Norte de Castilla, he initiated me in the secrets of his life and work, the simplicity, the common sense, the truth, being natural because everything that is fake is not good. He taught me all this, without patronizing me, he did it his way, without being annoying, without using aggressive language, with his well-intentioned irony, just with pure and subtle suggestions. Miguel managed the newspaper as the good referees lead a football match. His managing was not noticeable. Beside him we collected the multiple sounds of the news, the symphony of the sports, the municipal chronicle, the reference of the cabinet that always came in late throughout the Teletype, the local chronicle, the throb of the agriculture, the theological beating of ´pepe Lozano. Miguel created a brand new section, “El caballo de Troya”, which resulted rather irritating for Mr. Manuel Fraga. The discourse of the Minister of the movement has to be layed out in four columns. We had to sort out instructions such as “To its mandatory publishing hereby I send attached…Note related to the National Contest of Music Bands that will take place in Murcia”.

Being the Manager Director of the newspaper was a hard position for Delibes. This hard work had several stages: an internal management during two and a half years, full time management interrupted by the election of a responsible assistant manager, another stage of highly controlled management, going back to being the manager director and finally becoming a delegate of the editorial department at the board.

The detailed analysis of the circumstances, of these declines and relapses and above all the reasons of Franco´s burocracy is at this time is quite disappointing and somehow humiliating.

It is clear to see Delibes´ struggle to inform specially about the situation of the fields of Castilla and the agricultural problems; his attempts to introduce collaborators who were not linked to the regime, his disgust towards the subjugation of the instructions of the editorial page; his effort to be up to a society which wants to get rid of the authority of that regime […]

On the other hand, in this long process, the unity of the Administrative Board of the newspaper starts to break up due to the clash between the liberal tradition of the newspaper and its sales and the new collusions with the regime spaecially when Fraga came to power. In this way, what it had benn a strong support for so many years, turned into an ambiguous atmosphere which brought painful personal problems to Delibes.

Those years were as matter of fact, a period of time when we had to pay attention to the subjects, verbs and predicates, but we also ha d to learn how to enphasize, keep silent and deal throughout the language in some areas of the newspaper […].

“The room of the draftsman” received that name because in previous years it was in this room where the draftsmen of the newspaper udes to work, and from those years there were remainings of a big old desk and a cork panel that afterwards became half a notice board and half a panel to pin there cut outs and interesting things. At the back there was a sort of bookshelf which one door could be bent over and could be used a a desk to, ther was where Delibes installed himself and made his working place when he abandoned his Manager office: that became, as I like to call it, his grammar trench. There everything could be told as if it was a novel: the plot and the characters were always fighting for supremacy and then the eternal dilemma of how to say or not to say; saying not to say, how to insinuate without giving the feelling that it was an insinuation and how to spin round and round without ever landing but giving the sensation that you were touching the ground, or sometimes simply hit the bullseye. There was really nothing more stupid that the rules of a prining house- it doesn´t matter the name that it has- but maybe there nothing better than that to really learn what language means and no one better than a writer to teach that sometimes you can target one objective and hit a completely differnet one and it still will be real.

Tt is not difficult to check that Delibes feels at ease in some certain topics that he rarely abandones […]: Castilla and its people, Literature but moere specifically, novels, Nature- in which we could include his two favourite sports: hunting and fishing- and his memories of his Friends. It is evident an almost total absence of of political or ideological topics, except the Chronicles he send from Chzec Republic (La Primavera dePraga, 1986) for the magazine Triunfo […].

In general, Miguel Delibes does not incide in his heading on the so called important topics with only a great exception which will be those concerned to the Education issues. Normally he preffers “minor topics”, domestic issues and above all he prefers human beings themselves- also close, routinary too- as the topic for his articles. Delibes used to say of the art of writing novels that. “The narrative art leans no so much on being original, but on the importance of those aspects that seem unimportant, using for this pupose the description of characters with consistent and human qualities”.