In May the town hall of Valladolid pays tribute to Miguel Delibes at the Book Fair with a public reading of “El hereje” (“Heretic”) by a group of authorities and people from Valladolid.

From the 7th to the 13th of August and at the Film and Literature Festival of Burgos, a season  dedicated to the film adaptations of Delibes takes place and he receibes the “Cid de Honor” for his contribution to the so called,  7th Art.

On the 17th of October the author celebrates his 80th birthday and the city of Valladolid opens “The Heretic Rout”, an urban tour around the most significant places that appear in the novel. 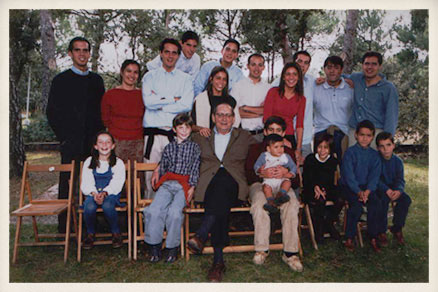 Miguel Delibes with his eighteen grandchildren on his 80th birthday.

In November an edition of the handscript of “The Path”, is edited to commemorate the 50th anniversary of the publishing of the novel.

On the 27th of March, Worldwide day of the Theater, it is represented in Valladolid the proyect “Trilogía teatral de Delibes” which consists in staging again three of the plays by Delibes in theaters: “Cinco horas con Mario”, “Las guerras de nuestros antepasados” and “La hoja roja”. The first one is represented again on the 6th of October at the Calderón Theater in Valladolid and starred once again by Lola Herrera. The second is represented again in the year 2002 at the Principal Theater of Palencia and the third one finally won´t be represented again. 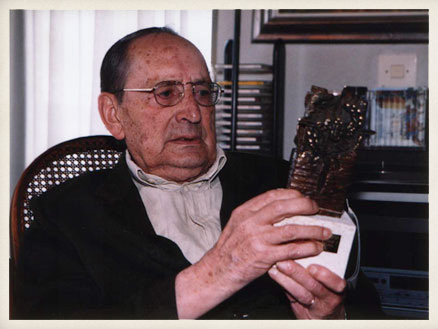 On the 17th of October and coinciding with the 81st birthday of the author, nominate Delibes for the Nobel Prize of Literature. This nomination is supported by many public figures related to the cultural activity and by thousands of people all over the world.

Delibes reads the closing ceremony discourse at the II Congress of the Spanish Language in Valladolid on the 19th of October 2001.

On the 14th of December Miguel Delibes receives the Premio Extraordinario in the first edition  of the “Castellanos y Leoneses del Mundo” , created by the Junta de Castilla y León and the newspaper El Mundo.

On the 31st of May it is represented again at Principal Theater of Palencia “Las guerras de nuestros antepasados”.

On the 14th of November, the Association of Scenic Directors of Spain (ADE) gives Miguel Delibes the Medal of the Association as an acknowledgment to his contribution to the Theater in Spain.

The Instituto de Desarrollo Comunitario (IDC) gives the author the Premio “Por un Mundo Rural Vivo”, for his “dignifying of the rural life”.

It is Published “Correspondencia, 1948-1986 (Miguel Delibes-Josep Vergés)“, )” a collection of letters sent to each other (writer and editor) along the mentioned years.

Between the 7th and 8th of February takes place an International Congress about the author at the University of New York City (CUNY) and the lecture Miguel Delibes is created having as headquarters the cities of Valladolid and New York. 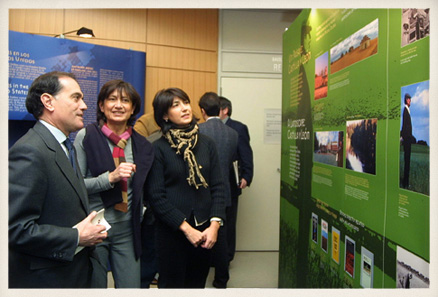 Elisa and Camino Delibes de Castro with the second vice president of the Junta de Castilla y León, Tomás Villanueva, on the day of the creation of the Miguel Delibes Chair.

In June appears a commemorative edition of “Mi idolatrado hijo Sisí“, coinciding with the 50th anniversary of the first edition of that novel.

In September 2003 and February 2004, the newspapaer El Norte de Castilla publishes the collection “All the novels of Miguel Delibes” in 21 volumes.

In September it is re-edited “Diario de un cazador“, ”, to commemorate the 50th anniversary of the first edition of this novel.

The newspaper El Norte de Castilla publishes the second part of Miguel Delibes´work, compiling in 25 volumes those titles that do not correspond to novels.

The 22nd of February it is opened “Miguel Delibes´ Room” at the Calderón Theater in Valladolid.

On the 15th of June the writer receives Premio VOCENTO a los valores Humanos, “for his defense of the human values throughout journalism, his personal literary sensibility towards those who are disadvantaged and his love for nature”.The award was given by the king and the queen of Spain and took place the 17th of October, on the birthday of the writer, in Valladolid. 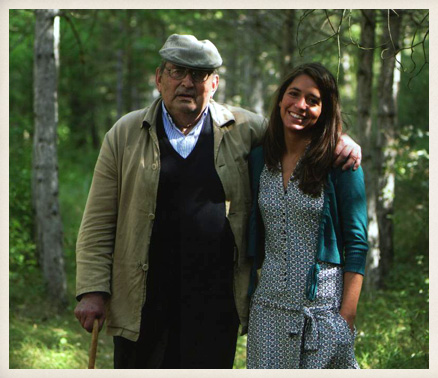 Miguel Delibes in Sedano (Burgos) with his granddaughter Ángeles who interviewed him on the occasion of the VOCENTO Award for Human Values. 2006.

On the 24th of November the Sociedad General de Autores de España (SGAE) nomites Delibes as a candidate to the Nobel Prize together with Francisco Ayala and Ernesto Sábato.

The short narrative of the author is compiled in a single volume with the title “Viejas historias y cuentos completes”.

In February is published a commemorative edition of the sixtieth anniversary of the novel “La sombra del ciprés es alargada“.

In April takes place the inauguration act in Valladolid of the Auditorium “Miguel Delibes” built by the prestigious arquitect Ricardo Bofil and that soon became the most representative building for the cultural life of Valladolid. On the 17th of October of 2011 (anniversary of the writer´s birthday) in this same building will be presented the Miguel Delibes Foundation in an act that will be presided by the Prince and Princess of Asturias.

Directed by Ramón García Domínguez they start with the publishing of “Complete Works” of Miguel Delibes a compilation in seven volumes and published simultaneously by Destino and Galxia&Gutenberg-Círculo de Lectores Publishing Houses.

Miguel Delibes receives the Premio “Quijote” awarded by the Asssociation of Spanish Writers.

From the 16th to the 18th of October takes place at the University of Valladolid the International Congress “Cruzando Fronteras: Miguel Delibes entre lo local y lo universal”.

Miguel Delibes is named Doctor honoris causa by the University of Salamanca as he was nominated by the Biology Faculty of Animal Biology.

The Town Hall of Ávila plays tribute to the writer coinciding with the 60th anniversary of the novel “La sombra del ciprés es alargada” (“The long shade of the cypress”) which is set in this city.

Miguel Delibes is adopted by the town of Molledo Portolín in the region of Cantabria and which inspired the novel “The Path”, at the same time his name is given to a street nearby the house where the writer spent his childhood. 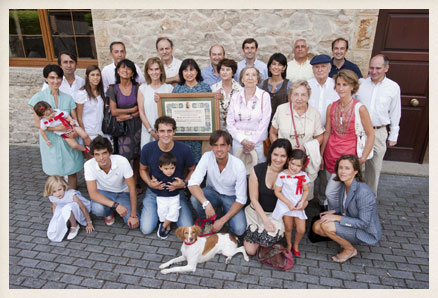 The Delibes family in Molledo Portolín (Cantabria). Angeles, daughter of the writer, holds the diploma granted by the Municipality of the municipality.

The writer receives the Premio “Dragonia Iberia” acknowledging his artistic expression from the Foundation Nueva Cultura del Agua, “to thank him his understanding and teaching us our relationship with nature in a universal language: feelings and memory”.

Delibes also receives the Golden Medal of Castilla y León given by the Junta of Castilla Y León and that highlights his lifelong and literay connection with his homeland.

On the 27th of September, the Government of Cantabria awards him with the Golden Medal of Turistic Merit, since he was descendant of Cantabria and a regular visitor of the region since he was a child and contributed with his many articles and novels (“The Path”, “Mi life in the fresh air”) to the spreading of the geography, culture and costumes of that region.