On the 7th of May Delives is granted the title os Doctor Honoris Causa by the University of Sarre (Germany).

In this same month there will be the Premiere of the cinema version of “La sombra del ciprés es alargada” (“The long shape of the cypress”), directed by Luis Alcoriza. In October it is edited the Theater play version of “Las guerras de nuestro antepasados” (“The wars of our ancestors”) and at he same time the Premiere takes place in Barcelona.

In September Miguel Delibes publishes “Pegar la hebra“, a collection of journalist articles and public interventions of the author.

On the 30th of May Miguel Delibes receives the Premio Nacional de las Letras Españolas awarded by the Culture Ministry.

In April the theater version of “Las guerras de nuestros antepasados” is performed for the first time in Buenos Aires, and it remains performing until the end of July.

From the 15th to the 19th of July, takes place the course The author and his work: Miguel Delibes included in the summer courses program of El Escorial organized by the Complutense University of Madrid. This seminar was directed by José Jiménez Lozano and had participants that are specialists on Miguel Delibes from all over the world.

In September the author publishes his eighteenth novel “Señora de rojo sobre fondo gris“, (“The Lady in red over grey background”) an emotional tribute to his wife, Ángeles, who passed away 17 years before.

From the 12th to the 15thof November takes place the V Congress of Contemporary Spanish Literature at Málaga University with the title “Miguel Delibes: The writer, the work and the lecturer” directed by Critóbal Cuevas García.

The Vasc Hunting and Fishing Association grants the author with the bston of aguijada with the vasc motto “hitza, hitz” (“the value of words”) which is a symbol of power and authority.

In March it is edited “La vida sobre ruedas“, ” (“Life on wheels”) a compilation of four short stories- previously published in “Mi vida al aire libre (Memorias deportivas de un hombre sedentario)“– that talk about sports, specially those that are practiced on wheels.

From the 12th of May to the 3rd of June due to the Premio Nacional de las Letras Españolas awarded to the author in 1991, takes place in Madrid a Encounter with Miguel Delibes, organized by the Center of Letras Españolas (Culture Ministry). They will consist in seven conferences and four debates at the cultural foundations Juan March and Mapfre-Vida with the aim of going in depth into Delibes´work. At the same time, the March Foundation hosts a bibliographical and docunmentary exhibition about the life and the work of the author. 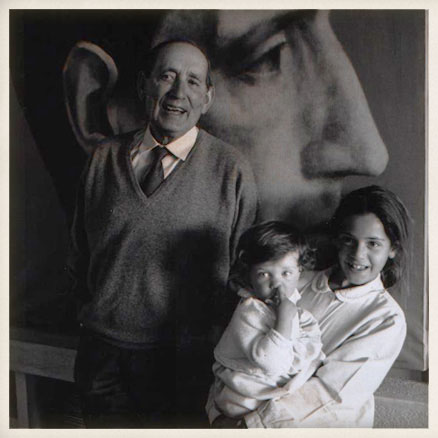 Miguel Delibes with his granddaughters Ángeles and Clara. Valladolid, 1992.

The 8th of October there is a new performance at the Teatro Imperial of Sevilla of “Las guerras de nuestros antepasados”, directed by José Sacristán.

This will be a recognition and tribute year for Miguel Delibes and it had its peak with the award Premio Cervantes.

On the 19th of April Delibes receives the golden medal from Valladolid Province. Taking the chance of this award they take place a series of conferences about Miguel Delibes and his work and also the opening of a bibliographic and documentary exhibition about the novelist. 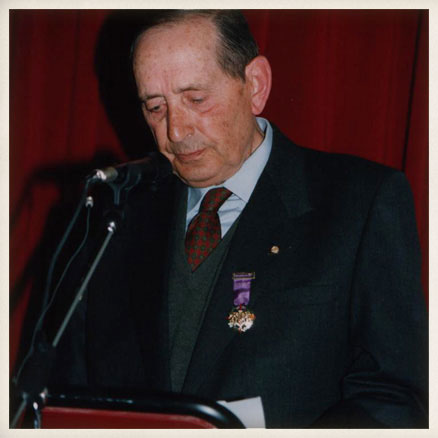 There is a re-editing of the children tale “La granjilla”, which is distributed all over the Schools and libraires of Valladolid.

From the 22nd to the 30th of October, takes place the 38th edition of the International cinema week of Valladolid (SEMINCI) and they dedicate a cicle to the films of Miguel Delibes and they award him the “Espiga de Oro”- top award of the contest- for his contribution to the cinema with his literature. As a result of this SEMINCI edition will see the light a book called: Miguel Delibes: the written image”.

On the 26th of November the Pediatric Association of Asturias, Cantabria and Castilla y León name him Honor Member for his fidelity and his particular way of taking to novels the childhood world.

On the 1st of December he is awarded with the Premio de Literatura en Lengua Castellana “Miguel de Cervantes”, by the Culture Ministry and it meant the highest recognition to the Letras Españolas.

. Following this acknowledgement two more anthologies see the light one of them is devoted to his hunting writings- these were selected by Ramón García Domínguez- “Miguel Delibes is a hunter who writes” and the other one is a complitation of six tales illustrated by Antonio Mingote and José Ramón Sánchez with the title of “Miguel Delibes, Premio de Literatura en Lengua Castellana Miguel de Cervantes 1993”.

At the same time several Spanish photographers dedicate a book to the writer, “La fotografía con Miguel Delibes”, and a moving exhibition dedicated to the author and his work is organized around the book.

As an opening to this season is opened another exhibition “Premios Cervantes. Una Literatura en dos Continentes” and statrs a season of confferences and debates about the work of the author with the title “Las constants de Delibes”. 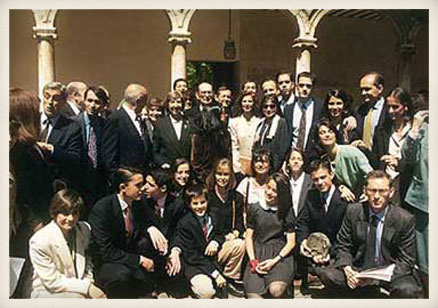 On the 17th of October, coinciding with his 14 birthday, there was the debut of “Le guerre promise” at the Théâtre des Nesie de Paris, the French version of “The wars of our Ancestors. This time the play is directed by Oscar Sisto.

In December appears an anthology of his texts about the cilhood with the title “Los niños” (“The children”).

El Instituto Cervantes (Cervantes Institute) organizes in Lisbon a cinema week based on the writer´s work.

In April, Miguel Delibes together with other 70 Sapnish intellectuals signs a manifest “En defensa de la Democracia” (“In defense of Democracy”).

On the 30th of Nay Delibes is invested Doctor honoris causa at the University of Alaclá de Henares. 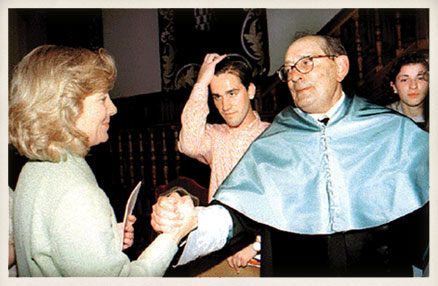 Miguel Delibes receives congratulations from the then Minister of Education and Culture, Esperanza Aguirre.

In Spetember the writer publishes “He dicho“, (“I said so”), a compilation of press articles, short essays and his discourse at the Premio Miguel de Cervantes award ceremony.

On the 24th of January it is awarded Premio de Periodismo “Miguel Delibes”, created by the Press Association of Valladolid and awarded to Fernando Lázaro Carreter who at that time was the Director of the Real Academia Española.

On the 24th of October is the Premiere the film “The Rats” as the opening movie at the 42nd International week of Cinema of Valladolid (SEMINCI), this film was an adaptation of the novel of the same name and directed by Antonio Giménez-Rico. 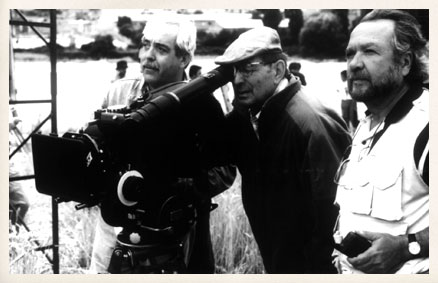 On the 3rd of Novenber Delibes receives the I Premio “Luka Brajnovic” de la Comunicación given by the University of Navarra recognizing his professional career committed to the defence and improvement of dignity and human values as freedom, solidariry and tolerance as well as his independent attitude considering the peculiar press regime he had to live in.

On the 20th of May Delibes needed surgery due to his cancer illness, this happened almost at the same time he finished his novel “El hereje” ” (“Heretic”).

On the 29th of September he publishes his last novel “El hereje“, (“Heretic”) dedicated to the city of Valladolid “my city”, which took him about three years to finish. In the first three days after the publishing of the novel, it sold 90,000 copies.

In June was the Premiere of “Una pareja perfecta” (“The perfect couple”), an adaptation to the cinema of the novel “Diario de un jubilado” (“Diary of a retired man”) and directed by Francesc Betriú and screenplay of Rafael Azcona.

Miguel Delibes is awarded in Ostober with the Premio Nacional de Narrativa, given by the Ministry of Culture for his novel “El hereje” (“Heretic”).

In November Delibes receives at his home in Valladolid the Golden Medal for his achievements in his working career- according to the Cabinet on the 30th of April- the award was given to him by the Minister of Work and Social Affairs, Manuel Pimentel and by the President of of La Junta de Castilla y León, Juan José Lucas. 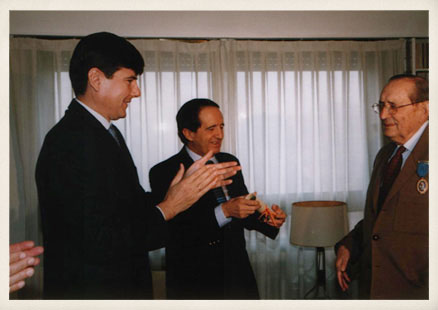 In this same month appears the first volume of the Collection “Mis libros Preferidos” (“My favourite books”) under the title “Los estragos del tiempo” (“The ravages of time passing”) and conformed by “El camino” (“The Path”),  “La mortaja” and “La hoja roja” (“The red paper”). Delibes wanted to compile in this collection his favourite titles and in this way making them his definite texts.

Appears another edition of “Mi mundo y el mundo”- A selection of works of Delibes for children aged 11 to 14- in the collection “Valepluma”, a joined edition by Edilesa and La Junta de Castilla y León.