On the 5th of June his sixth child, Adolfo, who is also a Biologist as other of his three brothers, nowadays he works as a civil servant for the Environment Council in the Junta de Castilla y León.

Miguel Delibes travels around Germany and he visitis several universities in November and December.

The writer publishes a book of rural chronicles with ilustrations of Jaume Pla called “Castilla” for a select publishing house called “Rosa Vera”. There were only  150 copies published of this book.  This same book will be published four years after under the tittle “Old historys of Castilla la Vieja“.

“El Camino” (“The Path”) is published in The United States with eighteen ilustrations of Delibes.

In July will be published “Por esos mundos: Sudamérica con escala en Canarias“. This book includes the same chronicles as “Un novelista descubre América- Chile en lo ajeno-“ but he includes a second part, “Tenerife” as the result of a brief visit of the writer to the Canary Island in January 1960. 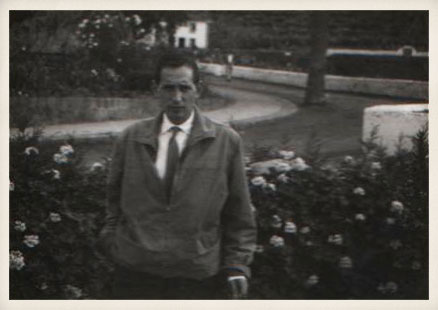 . In January Delibes publishes his eighth novel “Las ratas” (“The Rats”) which he started the 8th of March of 1959 as it is stated in the manuscript. This novel was awarded with the Critique Award granted by the Spanish Asociation of Lietrary Critics. Nevertheless, this novel suffered the censorship and the writer was not allowed to criticize the poverty and the abandoned situation in which Castilla was inmerse.

On the 15th of August dies María Setién at the age of 74 the mother of the writer. 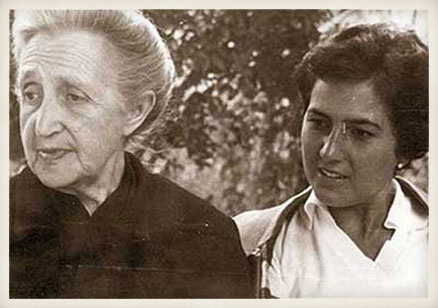 On the 16th of July, Camino is born, the last of his children. She has a Bachelor degree in Arts and she has diploma certification in landscape.

Ana Mariscal directs the cinema version of “El Camino” (“The Path”), the first of Delibes´novels adapted to de cinema.

Due to several confrontations with the Information and Tourism Minister, Manuel Fraga Iribarne, Delibes ends up resigning form his post as director of El Norte de Castilla. Despite this, Delibes continued managing the newpapaer in the shade until 1966.

Miguel Delibes publishes his first hunting theme based book, “La caza de la perdiz roja“, that contained some pictures by Oriol Maspons. The book is about the dialogue between the hunter-writer and the partridge hunter Juan Gualberto, “el barbas”. 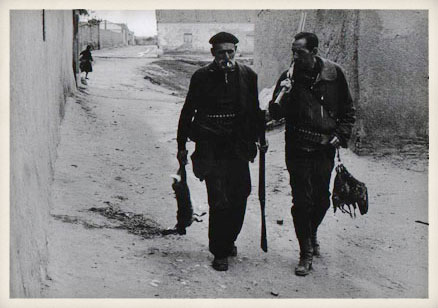 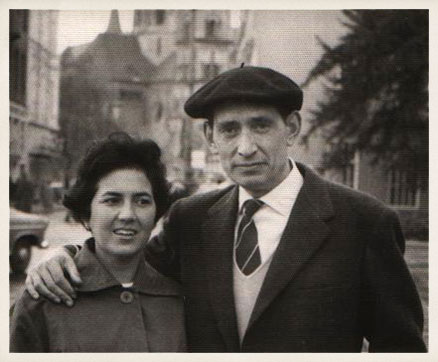 Miguel Delibes and his wife, Ángeles, in Bonn (Alemania).

“Viejas historias de Castilla la Vieja“, is published, a book about a village of Castilla seen through the eyes of an emigrant that returns to his village after 48 years abroad. This book was previously published in 1960 with the title “Castilla”.

In May his second complitation of hunting topics books is published “El libro de la caza menor“, (“Book of minor hunting”) with photographs by Francisco Ontañón.

In April sees the light the first volume of the “Complete Works” “ObraCompleta” of Delibes that includes a preface that explains the reason why of his literary activity. The first volume includes “La sombra del ciprés es alargada“, “El camino” (“ThePath”) and “Mi idolatrado hijo Sisí“. 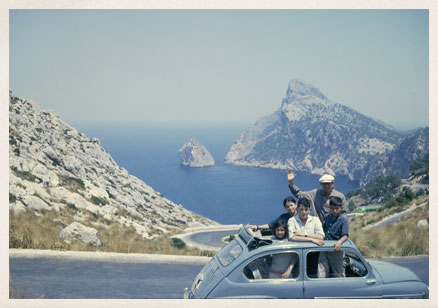 Holidays in Mallorca with their four oldest children.

Miguel Delibes lived in the United Sated for six months, there he works as a visitor Professor at the Foreign Languages and Literature Department of Maryland University. 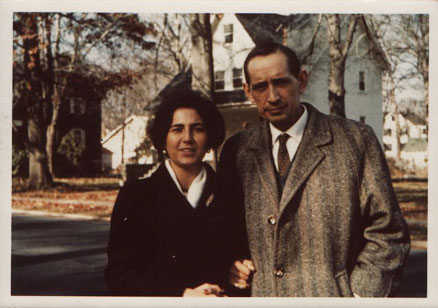 Miguel Delibes and his wife, Ángeles, in Washington. Autumn of 1964.

The writer opens the “Cultural Lecture Hall” of El Norte de Castilla with a conference of the philosopher Julián Marías. Some of the most relevant names of the Spanish intellectuals will develop some of their activity in this lecture hall, sometimes generating controversy with the authorities.

Miguel Delibes took part in the doubing of the film Doctor Zhivago from the British director David Lean.

In April his fourth travelling book “USA y yo“, sees the light. It is and illustrated work that summarizes the experiences of the author two years before, during his time in that country.

This will be his nineth novel and one of the most relevant titles of the author. In May saw the light the second volume of “Complete Works” of Miguel Delibes with the following titles: “Diary of a Hunter”, “Diary of an Emigrant”, “Hunting the Red Partridge”, “ Old stories of Castilla la Vieja” and “Book of the minor Hunting”. In the Preface the writer explains his theories about the hunting practice and he defines himself as “a hunter that writes”. He also gives a guideline and explains his literary fixed values: the death, childhood, nature and fellowship.

In this year the essay “La milana” is published in a tribute book to the linguist Emilio Alarcos- “Homenaje al professor Alarcos García”- edited by the University of Valladolid. This essay could be considered the woom of the novel “Los santos inocentes” which was published in 1981.

On the 2nd of February was opened with the iniciative of Miguel Delibes “Cine Club El Norte deCastilla”, with the opening movie Kane Citizen by Orson Welles.

. Invited by the Universities of Prague and Brno, Miguel Delibes travels around Chzek Republic just a few months before the U.S.S.R. called off the experience known as “Prague´s Spring”.

Under that same title “La primavera de Praga“(“Prague´s Spring) it is published a chronicle book that were previously compiled in the magazine “Triunfo”. In those chronicles the writer talks about his experiences lived in Prague. When the book was being printed the Russian invasion took place and Delibes verifies and condemns this event.

In March “Vivir al día“. sees the light. It is a series of several articles published in different Spanish newspapers- El Norte de Castilla, La Vanguardia, Ya, Informaciones, etc.- and under different circumstances […] and along a period of almost fifteen years, from 1953 to 1967 (citing the Preface).

In April the third volume of “Complete Works” of Delibes with the novels “Aún es de día“, “La hoja roja” y “Las ratas“. In the preface the novelist explains how those three novels follow one of his fixed values of his narrative: the solidarity towards his fellows.

In November it is broadcasted on Spanish TV (TVE), “En una noche así”, which was the adaptation for TV by Cayetano Luca de Tena of a tale of the same title included in “La Partida”, a volume of tales published in 1954.

In July Delibes publishes his tenth novel “Parábola del náufrago“. It is a critique of the totalitary regimes and a satire against the destruction of the language theories. 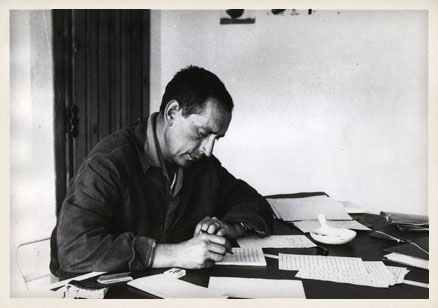 Miguel Delibes writing in his house in Sedano (Burgos). 60’s