As a child Delibes went to Primary School at the Hermanas Carmelitas in Valladolid and then he attended to the Lourdes Secondary and High School (Hermanos de la Salle) also in Valladolid. 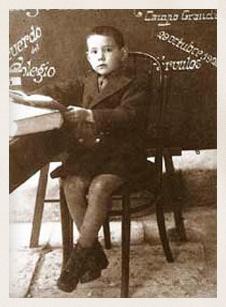 The bursting out of the Spanish Civil War coincides with Delibes´ entry in the Business School. He will combine these studies with modeling and drawing at the Trading and Arts School of Valladolid.

Two years after the beginning of the Civil War and with the urge of the possibility of being claimed to join the army, he makes the decition of joining the Navy. He is then sent to the training ship “Galatea” and after that he will be based at the Cruise ship “Canarias”.
The Spanish Civil War ends and Miguel Delibes returns to Valladolid.